WORLD No 1 T20 bowler Tabraiz Shamsi has attributed his good form and excellent consistency to being afforded “regular game time”. Shamsi sits at the summit of the global T20 bowlers list – over a 100 points clear of nearest rival Rashid Khan from Afghanistan. The left-arm wrist-spinner is worthy of the crown too, having firstly contained the power-packed West Indies batting line-up in the Caribbean and now bamboozling Ireland’s fragile batting line-up in the first T20I in Malahide. The 31-year-old bagged 4/27 to drive South Africa to a comfortable 33-run victory on Monday. A true character of the Proteas team with his unique celebrations and constant broad smile on the field, Shamsi deserves all the praise coming his way now after years spent learning his trade under the tutorship of the great Imran Tahir. There would undoubtedly have been times when he questioned his role and self-worth, and subsequently tried too hard to perform when the opportunity to play eventually arose. But now that he is unquestionably the Proteas’ go-to-man in white-ball cricket his class is shining through. “Previously it was one game now and then another three games later and that’s how my career started for obvious reasons. There is no dispute to why it was like that. I think it’s just regular game time,” Shamsi said of his excellent form recently. “You get to learn from your mistakes and implement the good stuff a lot more. We all know form is temporary. You just have to keep on working hard on your processes. There will be a patch when things maybe don’t go your way, and then it’s just about staying positive and then trying to contribute, if it’s not with the ball then it’s in other ways like behind the scenes.” Notable about Shamsi’s performances these days is the maturity that he shows in going about his work. Becoming a father during lockdown has obviously played a prominent role in this transformation, which has allowed him to adopt a very philosophical attitude towards his game. “The only thing I can really control is trying to bowl the ball in the areas that I want to bowl in because wickets aren’t guaranteed. Everything else depends on how the batsman plays the ball,” he said. “There are two ways to skin a cat. Obviously in the West Indies I had a different role to play with the power-hitters that they do have. With those guys we just had to keep them quiet because we knew they would keep coming at us. The amount of power that they had in their batting line-up, I felt like my job was to try and keep things quiet. I was over the moon with the performances there. Pretty chuffed with that.” 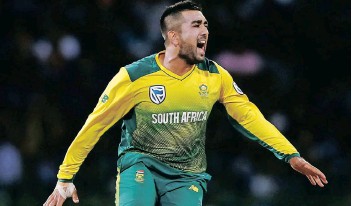