GROWING up in Clare Estate, Dr Suran (Morar) Ramphal attended the SM Jhavary Primary School and his love for sport was influenced by the late former physical education teacher Fabs Byrow. “At the age of 9, I took an interest in football, cricket and athletics. Much of my interest was initiated by the school teachers,” said Ramphal. Under Byrow’s guidance, Ramphal joined the then recently established Clare Celtic Colts division when he was 10 years old. The Celtic Colts were affiliated to the Durban Football Association (DFA). At Clare Celtic he helped the team win the Colts, Juvenile and Junior Division in the DFA. Ramphal’s contributions to the team earned him selection to the DFA team in 1977 and 1979. “The members of the football club were all from Clare Estate and together with Mr Byrow’s mentorship and coaching, it became a formidable club. What made the team so successful was that the same players moved from the Colts to the Juvenile and then to the Junior Divisions,” said Ramphal. As a player, one of Ramphal’s strengths was his versatility as he was able to play across defence and in midfield. “Some of my greatest memories were defeating Sydenham United in the semi-final of the Clover Cup at Tills Crescent. We went on to win that cup. In 1979, the team won the Govan Morar Cup in a thrilling final at Curries Fountain. In 1980, we defeated Eagles from Wentworth 3-2 in the junior division and went on to win the league without losing a match in that year,” added Ramphal. After completing school, Ramphal continued to represent Clare Celtic in the Premier League until it dissolved. He then joined Varsity Heights. His football career ended when he had to focus more on work commitments. “My sporting role models were Pele and the legendary Ian Rush, a former Liverpool striker. Mr Byrow was an inspiration to me and the young players of Clare Celtic. He invested good values in our sporting and schooling careers,” said Ramphal. Ramphal believes that a strong sporting culture is absent among today’s youth. “The status of sport among the youth is disappointing and the absence of physical education in schools sadly leads to the poor introduction of sport, and nurturing talent is not practical. More must be done at a community/school level to increase awareness of sport to the youth. A balance of sport and education working together with social cohesion is pivotal in the development of individuals,” he said. Ramphal currently works as a specialist gynaecologist at the Nelson Mandela School of Medicine and he heads the unit at the Inkosi Albert Luthuli Hospital. During his free time, Ramphal enjoys reading, watching sport and wildlife, and walking along the coastline. He supports Liverpool and his favourite players are Lionel Messi and Luis Suarez. Ramphal lives in Glenwood and is married to Shashika who is employed by the South African Police Service. 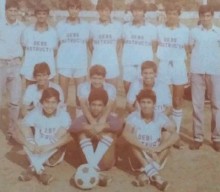