‘Every shop including mine was targeted’

VENISHREE Govender believed her shop at the Ridge Shopping Mall in Shallcross would be safe from looting. But she was wrong. Last Sunday protesters entered the mall, broke into shops and stole. They even removed taps from the bathrooms and attempted to set businesses alight. Govender, who owns Sanctuary of Essence, selling natural medicines, said: “I thought my shop would be of no interest to them and that they would target the furniture, appliances and food shops. But every shop, including mine, was targeted.” The mother of two started the business in 1996. “Back then there was a demand for natural medicine. I had a good customer base but my dream was to branch out from selling from home to proper business premises. “I got that opportunity in 2012 when I opened my store at the Ridge Shopping Mall. When I opened, I managed to further grow my clientele.” She said she had been unable to visit her shop since the looting but she was told nothing was left behind. “Nothing was insured. I lost stock in the region of R800 000. But I will somehow continue with my business as it’s my passion.” Govender added: “What has happened has left me angry. I am angry because the people that did this are the same community that we assist with food hampers and jobs. “They did not think twice to destroy our businesses and put a roadblock in our lives. During this time, my customers have been supportive. They are like family. They said that once I am on my feet again they will support my business.” Xolani Duma, 32, who lives at the nearby Bottlebrush informal settlement, is a casual worker at Checkers Hyper at the mall. “When the looting started, I chose to stay indoors and not partake in whatever was happening. “When I heard the mall was targeted, I felt very sad because I work there. “I called my colleagues and the manager and I was told not to go into work last Monday because everything was closed and they were uncertain when we could go in. “Now, I am scared about my job. I have children and my wife is a domestic worker. “We do what we can to get by.” The Ridge Shopping Mall and Checkers Hyper had not commented by the time of publication. 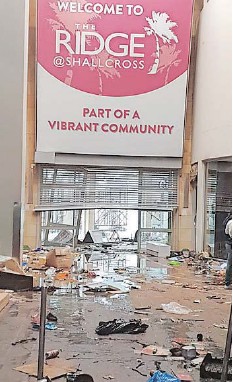