Making a difference one truckload at a time

GAUTENG-based businessmen and residents have been sending groceries to the KwaZulu-Natal by the truckload since the weekend. Some communities in Durban have been left without basic food items like bread, milk, flour, rice and oil since mass looting and damage to businesses erupted. Shops have had a limited supply of essentials. “I was upset knowing that I had friends and family suffering without basic food items, so I partnered with other businessmen to bring relief to the province,” said Ronald Ramsay, the owner of LLL Energy, a diesel depot, in Germiston. Ramsay, formerly of Unit 5 in Chatsworth, said among the businessmen were Dhayalan Naidoo (chief executive of Hychem) and Sean Pather (the managing director of XPRESS Trucking). “We started the Making a Difference SA campaign, which is a non-profit organisation. One of the businessmen owns a trucking company and he helped transport groceries to Durban on Saturday. He also secured a warehouse in Kyalami Business Park, which we use as a base camp.” He said they alerted people to the project and they readily decided to help. “People of all race groups showed up in their numbers to assist us and donate stuff. “Those who wanted to send specific things for their families in Durban were also given the chance to do so at no cost. Our only request was that along with their own parcel, they send a donation for another family.” Ramsamy said a truck with 84 tons of food arrived in Durban for distribution in Chatsworth, Pietermaritzburg, Isipingo, Phoenix and Merebank. Another truck with 20 tons of food was destined to reach the city later this week. “We understand the situation in Durban has calmed down but we still want to send help. “We know people are finding it hard to feed their families. This week, we are working on boxes that will have essential items for families such as soap, rice, salt and long-life milk.” He said during the first delivery, the truck also stopped at baby and old-age homes. “Just like ordinary families were suffering, so were the homes.” Barlin Govender, from the Community Development Foundation, said he was born in Clairwood and grew up in Chatsworth. “Both these areas are my areas and I felt hurt and angry when I heard what was happening. I said I needed to go out and assist these communities, so I reached out to friends.” On Sunday, Govender sent a 22-ton truck with oil, flour, rice, sugar, baby food, canned food and other household items to Isipingo, Chatsworth, Phoenix and Tongaat. This week he plans to send another eight-ton truck with groceries donated solely by the Midrand community. “I cannot sit back when people are suffering. For as long as I am alive, I will serve the people,” he said. 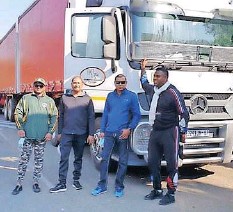